Scarcity of potential is a big no for a nation like India. In the last few years, this nation has witnessed many changes including the introduction of new businesses & startups, advancement in technology, infrastructure push, and institutional reforms to name a few. However, one of the most significant change that is commendable and is bringing several advantages and multifold growth to the nation is the empowerment of women. Nevertheless, India is still a male-dominated society, where women are often seen as subordinate and inferior to men, but the situation is now improving and this was the need of the hour for this nation. In the current era, women in India are not just advancing, flourishing or becoming independent, but they are etching their names as leaders, successful entrepreneurs and also influential icons all over the world, leveraging their excellence in diverse fields. Nowadays, businesses & organizations are not just headed by men, but many women leaders have come forwards in the entrepreneurial eco-system and got success. Not just that but women are playing a vital role in the growth of the nation and have made a big impact and got success in almost every sector. Though they have been underrepresented in most segments of professional and corporate life, women leaders in India are indeed picking up fast to catch up with their men counterparts. In this article, we’ll learn about some of the women leaders who are ‘actually’ driving changes in society. But this article will not be the same as many other articles available on the internet that features the renowned names in the segment. Today, we’ll talk mainly about Five Lesser-Known Women Leaders in India, who have not just set an example by breaking the glass ceiling but have genuinely driven the society from a good place to a better spot.

Chayaa Nanjappa: She is the Founder-Partner of Nectar Fresh, a company with a net worth of six crore rupees and a turnover of 10 crore rupees per annum. Awarded the ‘National Best Entrepreneur Award’ in food processing by the Confederation of Women Entrepreneurs of India in 2014, Mysuru’s Chayaa spearheads a rural enterprise which sources high-quality honey that is bought by people from as far as Europe and the United States. Chayaa did her schooling in Christ the King Convent, Mysore. She was forced to halt her education after class 12. However, she did a course at the Central Bee and Research Training Institute (CBTRI) in Pune, in 2006-07. Today, Nectar Fresh, which produces monofloral honey, is one of the largest bulk suppliers and packers of honey in the country and provides a livelihood for not just illiterate communities in Mysore and Mandya districts, but also tribal communities across the state.

Mehvish Mushtaq: She is the first Kashmiri woman to create an android application, named as ‘Dial Kashmir’. It was created back in 2013 and was the first-ever app for Kashmir valley. By developing a fully functional and typically useful application, Mehvish broke all stereotypical and entrepreneurial barriers with her brainchild of a Kashmir-centric Yellow Pages equivalent. Amidst the chaos that takes place, Kashmiri women seem to be unseen or working inside their home. Hence, the story of this young entrepreneur feels like a whiff of fresh air, subsequent to all the bloodshed and political tensions. The key purpose behind Dial Kashmir is information. Hence, the app consists of a directory feature that provides people with phone numbers, e-mail ids, and addresses of necessary as well as commercial services in Kashmir. It contains over 500 contacts of government. In addition to this, it also has other features like finding pin code, railway timings, list of holidays, Muslim prayer timings, and much more. Since its launch, the app has been downloaded more than 50,000 times from the Google Play Store and has a rating of 4.3, with over 1,700 reviews and ratings. A lot of people found it extremely beneficial in multiple ways. For her application, Mehvish was awarded Femina Women's Awards (Online Influencer), Space Communications Award, ALL Grassroots Women Achievers Award in 2014 and The Sunday Standard Devi Awards Delhi in 2016. She also received Nari Shakti Puraskar in 2018 from President Ramnath Kovind.

Neha Arora: Ever wonder, how it would be for differently-abled to travel places and accumulate new experiences? India, admittedly, is not the most hospitable of places for people that have some form of disability. But things are changing, albeit slowly, and Neha Arora is one such leader who is contributing her best to make this change happen in the country. Delhi-based Neha and her organization Planet Abled have opened new horizons for India’s differently-abled population, helping them travel instead of being confined to the four walls of their homes. Established in 2016, Planet Abled is a travel company exclusively catering to the needs of the differently-abled. Neha through her venture endeavours to diminish the travelling challenge of the special community, and provides amazing tour packages that include special portable ramps for easier accessibility. There are over a billion people with different disabilities in the world, but the percentage of them travelling is minuscule, owning to lack of accessible travel options available. Neha took the challenge to offer something which can change the realm and with her dedication, she identified the gap and came forward to give the special community the freedom to travel no matter what their disability is. Whether they want to experience a small facet of the city they are in or they want to travel across multiple cities of their interest, Planet Abled got their back.

Pabiben Rabari: She is not just a women entrepreneur, but she stands tall as a strong women leader and also leads the colourful Kutch district as a true brand ambassador. Pabiben Rabari is from Bhadroi Village in Anjar Taluka of Kutch, Gujarat. She started embroidery work at an early age and invented a new embroidery art form called 'Hari Jari'. She founded one of the first women artisan enterprises in India named as pabiben.com. The company produces a line of shopping bags called the Pabi Bag that is used in many Bollywood and Hollywood Movies. Today, Pabiben.com is one successful women artisan enterprise which helps women to empower themselves. Pabiben was the recipient of a national award for outstanding performance in rural business in 2018 and the award was given to her by none other than Prime Minister Narendra Modi. No wonder, a woman like Pabiben Rabari is an inspiration for all women who should shape their own future, and those of their families and future generations. She is an idol to many in her community.  At present, there are around 50 women from her village working with her but she aims to help more women to create their identity with the help of their artistic talent.

Sobita Tamuli: Belonging from a small place like Telana village in Assam, Sobita has made a difference in the society by taking up entrepreneurship as a responsibility. She runs Seuji, an all-women self-help group that manufactures and sells organic manure, and makes and sells traditional Assamese japis. Back in 2002, Sobita was just 18-year-old married girl with little formal information about Seuji. Later, she gathered a few other women in her village and put her plan into action. Known as Kesuhaar, Seuji makes organic manure containing natural elements like cow dung, banana plant remains earthworms, and fallen leaves, and sells it for Rs. 50 per packet. Today, she is a successful entrepreneur heading a thriving establishment that has under its wings two brands flourishing in the local market.

Apart from these five leaders that we have featured, there are many other women who have gone beyond their usual limits to achieve something that is not easily achievable. These women leaders are not just setting examples in the society by stepping out of their comfort zone but are acting as a catalyst of inspiration for all the working women and even homemakers to realize their ability and step up in their desired fields, where they can flourish and excel while creating history. 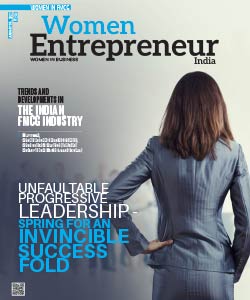