Believe it or not, a few years back it was a common view that the tech wizardry is not elected by women as their career. However, time has now changed. The world is witnessing drastic changes and indeed this change in perception is because of the fact that many Indian women today are pioneering across a gamut of industries by leveraging the best of their prowess in global technologies. ‘Never underestimate the power of a woman’, the aforementioned sentence is not merely a quote, it is actually a fact, which is being justified by women leaders who are dedicated to their dreams and hard work. Indian women have come a long way from being just a homemaker to business, inventions, and leading new ideas. Today, they are renowned as teachers, doctors, engineers, tech professionals, sports maestro and much more. From less than 15 percent of the workforce around 2010, women now make up a significant number of hires among entry-level recruits in companies like Infosys, Wipro, Accenture and others. And unlike in the past, many of them look at long careers in the corporate world. In the current era, women are not just in HR or marketing roles, but even in deep technology fields like R&D, Chip Design, Artificial Intelligence (AI), Blockchain, Machine Learning, Robotics and much more.

Yes, women nowadays are performing spectacularly in all kind of space, including the technology domain, and in this article we are going to focus on women leaders who are playing an important part of the biggest shift in the industry with their innovative organizations changing lives. The technology sector is not just a men-oriented space anymore, women are competing and offering their best in the industry and this change is highly commendable. Let’s have a look at some of the women leaders and their ventures that are driving changes in the society.

Artificial intelligence (AI), along with machine learning (ML), computer vision and the Internet of things (IoT), is fast evolving as a significant general-purpose technology. Today, the amalgamation of these technologies are turning things into reality, what used to be the stuff of sci-fi novels just a few decades ago. But, above that, the way women leaders are leveraging AI to make a shift in society is a thing that cannot be ignored.

Chandralika Hazarika (Co-Founder, Bigthinx): Chandralika, who has formerly served at ITC and Space Matrix, founded Bigthinx in 2015. A marketing expert, who has ten years of expertise, was always interested in generating simplistic but highly automatic tech commodities that could be utilized by everyone. Today, leveraging her offerings a user can get to join immersive buying through real-time visual explorations and virtual reality. Bigthinx is a deep-tech startup specializing in Artificial Intelligence for fashion, retail and fitness. Its software carries out a 3D body scan using only two photos from a smartphone to calculate 44 precise body measurements and body composition ratios with over 95 percent accuracy. Bigthinx’s neural networks create a personalized virtual avatar from these photos and also use AI to digitally recreate 3D clothing from any 2D image instantly to show how it would look, fit and drape as if in reality. Bigthinx has swept AI and Fashion awards globally and is backed by Startup Bootcamp as one of the top ten fashion-tech companies in the world. It has also ventured into digital models and virtual photoshoots, enabling brands to shoot catalogs and organize virtual runway shows completely digitally and at a fraction of the cost of real shoots. Not just that but Bigthinx is a global Top-10 Fashion tech company backed by Startup Bootcamp.

Mausumi Acharyya (Founder, ChironX): Founded in 2017, ChironX (earlier known as Advenio Technosys) detects diseases from large populations of medical images. ChironX AI is a computer vision-based diagnostic startup that uses its patent-pending deep learning algorithm, to perform early disease detection, risk prediction and prognosis of diseases which are local to the eye as well as systemic diseases like Cardiovascular ailments, Hypertension, Alzheimer’s, Stroke and Parkinson’s. It has an auto diagnostic software which uses complex image processing AI algorithms along with classical machine learning techniques. It can plug-and-play into any third-party hardware device, which is used to scan the retinal image. ChironX’s solution are hardware agnostic and capable to work on edge-based infrastructure as well, ensuring that it can easily be deployed in low-resource environments as well. ChironX’s research activities are funded by the Biotechnology Industry Research Assistance Council (BIRAC) and the Bill Melinda Gates Foundation and are being seed-funded by KStart.

Manjiri Bakre (Founder & CEO, OncoStem Diagnostics): Manjiri Bakre founded OncoStem in 2011. This firm uses machine learning algorithms to help in personalized cancer treatment. OncoStem uses Proteomics and Genomics-based platforms and with the aid of a molecular fingerprint of a tumour, predicts cancer recurrence. Knowing the recurrence of cancer will also help to develop new drugs. It has a product called ‘CanAssist-Breast’, which they aim to help reduce breast cancer can predict the likelihood of cancer returning by analyzing samples of the patient’s tumour. Once this has been analyzed through a machine learning-based algorithm, the patient is classified as ‘low’ or ‘high’ risk. Patients classified as ‘high-risk’ would have a greater probability of cancer recurring than those classified as ‘low-risk’. Those with a low-risk score can forgo Chemotherapy. It also aims to develop tests for multiple cancers including oral and colon.

Amrutha Valli (Founder & CEO, PurpleApple): Amrutha founded PurpleApple Infosystems in 2016, which owns TRYb4uBUY, a channel that uses AI to allow users to try products like spectacles, jewellery, apparel, furniture, furnishings, wallpapers, home décor, and much more in a live environment with the exact size. PurpleApple merchandises enable companies to ‘Engage, Entertain & Educate’ the clients efficiently to improve the products and services which, in turn, works to increase profits. PurpleApple is one of the Top 50 Women Entrepreneur Program by NSRCEL (IIM Bangalore), one of top 30 Women Entrepreneur Empowerment Program by WEE Foundation (IIT Delhi) & XLR8AP (Andhra Pradesh Innovation Society, University Of Texas & FICCI). Though after working with top corporates like Wipro and Tata Docomo, Amrutha decided to start up in the AR space, however, it took her more than 20 years of working as a security consultant to think of starting up; yet whatever it is it was a worthy decision of her.

K Suriya Prabha (Founder & CEO, YouCode): K Suriya Prabha founded YouCode Intelligence Solutions to introduce Artificial Intelligence in a fun, playful way to children in remote villages of Tamil Nadu. Though AI is bound to impact society in numerous ways but when and where this influence will be felt can’t be foretold; Suriya’s social development based start-up is turning the aforementioned expectations come true. YouCode’s goal is to enable kids to develop computational thinking and problem-solving foundation from a young age. YouCode runs unique ‘AI4KIDS’ camps across remote villages and government schools in Tamil Nadu, to inspire kids to be innovative and creative in the technology domain and thus be at the epicentre of the forthcoming AI revolution. It covers three areas – ‘Code the Robots’, ‘Become a Robot’ and ‘Experience AI’ where Google and Amazon kits are used to explain the power of AI. It’s a one-day programme covering various aspects with a lot of interaction and involvement of the children. YouCode is bootstrapped and does not charge the school or children for any of its programmes at present. It aims to tap CSR funding and channel it to AI education in villages.

Apart from these five bright minds, there are many other women leaders who have been contributing their best to the industry while achieving their dream that may seem impossible to many. These women leaders are not just setting examples in the society by stepping out of their comfort zone but are acting as a catalyst of inspiration for all of the women who are interested in technology domain to realize their ability and step up to achieve their dreams. Yet, in this AI era, research has suggested that corporate giants still have less percentage of women in the technical department. Facebook’s diversity report suggests that there are 22 percent of women in the technical department and 15 percent of women work in the AI research group. Similarly, Google’s diversity report suggests that only 10 percent women are working on machine intelligence. Hence, there exists a strong need to encourage women participation as there are many more women around the world, stepping out of the pre-existed shelter and going beyond the walls to shape the future. 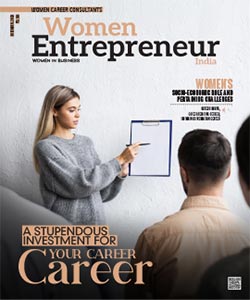